From MMA to Motherhood: Five Insights from Miesha Tate 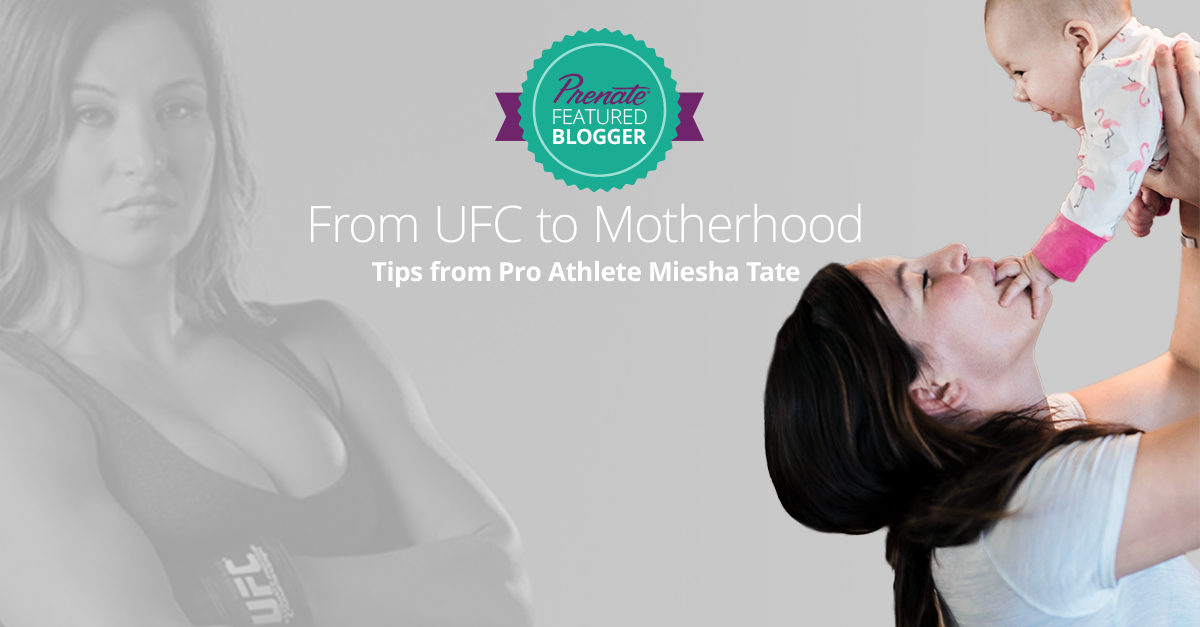 This post was sponsored by Avion Pharmaceuticals and should not be construed to constitute medical advice. Miesha’s personal story and opinions are her own. She is not a medical professional and is not qualified to give medical advice. Please talk with your doctor about your individual medical situation.

Prenate® Vitamin Family is teaming up with Miesha Tate to help bring awareness to the importance of healthy habits before, during, and after pregnancy. Miesha, a women’s MMA and UFC champion, and Prenate® are working together to offer insight and advice to women on maintaining a healthy lifestyle, being mentally strong, focusing on nutrition, and setting achievable life goals as they transition to motherhood. This month, we’re sharing five insights we learned from Miesha about her UFC career, philosophies, and role as a new mom.

Q: I understand that you joined the boys’ wrestling team at your high school in Tacoma, Washington. Did you always envision yourself as an MMA champion or did you have other career aspirations as a kid?

I will forever be grateful to my mother for that. I don’t know if she knew at the time how valuable that would be to me later in life, or how much that helped shape my character… but it really did. For her to instill that in me allowed me to not be afraid to do whatever I wanted to do. 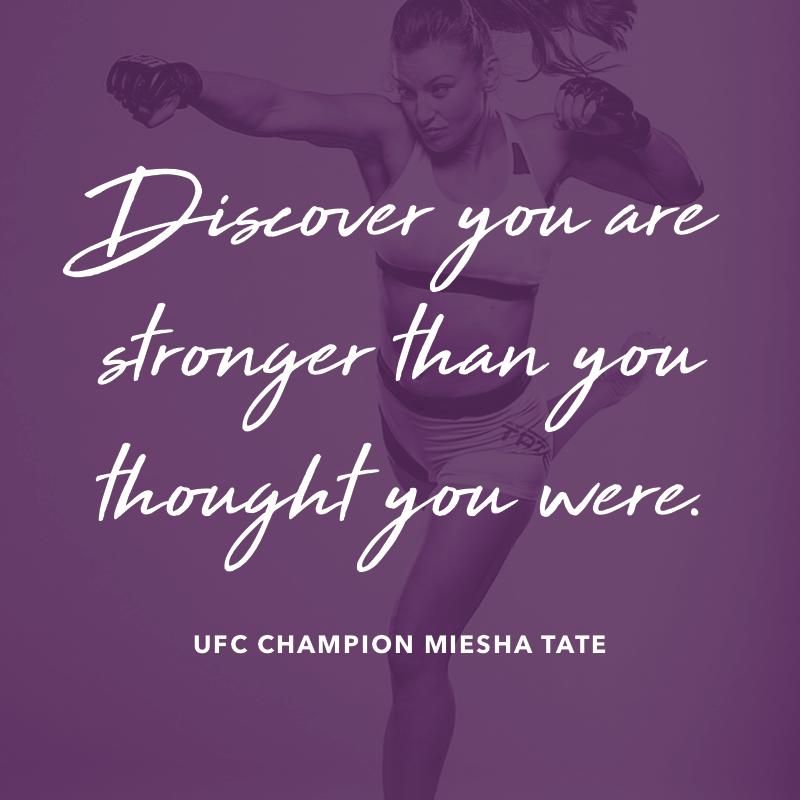 Q: You’ve been credited as playing a huge role in bringing awareness to women’s MMA and moving it more into the mainstream. What was it like in the early years and how did you keep pushing forward when women’s MMA wasn’t getting the respect it deserved?

A: For me [MMA] was more than what other people thought, as far as the respect and what the sport deserved. I didn’t focus too much on that in the beginning because I was just enjoying competing. I didn’t care what other people thought … and I think that’s exactly why I [chose] wrestling. If I had listened to what everyone else said and I hadn’t followed my own ambitions and my own passion and made my own way, then I would have never started wrestling. There was this concept that women shouldn’t wrestle. There was no opportunity for women really, it was [somewhat] frowned upon. It was the same thing when I transitioned into MMA. But [MMA] spoke to my soul. I felt alive doing it. So I didn’t care that it was a spectacle to everyone else. I didn’t care that it wasn’t necessarily getting the respect it deserved. I just did it because I loved it. I just focused on that. Nobody else’s opinion mattered to me.

Mixed martial arts challenged me in every sense of my being: physically, mentally, emotionally, spiritually. And I think I enjoyed the challenge. I enjoyed that I faced a lot of adversity in the sport. I lost my first fight, pretty brutally. I got my nose broken and was bleeding everywhere. It was pretty awful. But the adversity is what drew me to it. I knew I could do better than that. Getting beat up didn’t scare me. Physically I believed that I could heal. I’m tough, I could get through it. But challenging myself to dig deeper, to learn more about myself, to find newfound strength that I didn’t know I had before – those are all things that are addicting. Especially when you do face adversity and you get to the other side. You discover something about yourself and that you are stronger than you thought you were. That’s a great feeling. Win, lose, or draw, I think I walked away from every fight I ever had feeling stronger than I was before.

Q: Being a top competitor and champion in MMA and later UFC required long hours of preparation and training. How did that experience help you prepare for pregnancy and becoming a mom?

A: To get through a training camp and then step into the octagon, knowing that the person standing across from you wants to try to beat you as badly as you want to beat them, takes a lot of mental fortitude. That helps when you translate it to other aspects of your life. Mental fortitude helps with everything. When I was pregnant, I didn’t lack the motivation to work out. I drew from the strength I had created from my whole fight career.

When I was fighting it was just my safety on the line. If I messed up, it was my [bones] getting broken. But with motherhood it’s scary because it’s someone else I’m responsible for … and I’m scared of what I don’t know. So I want to know everything and all the best things. And I don’t just want to get by. I want her to have every advantage possible. I want to know, “What do I eat so that her brain is developing maximally. What do I need to do to make sure that she’s super healthy and everything is top-notch?” So I’m competitive now, but with a totally different motive. 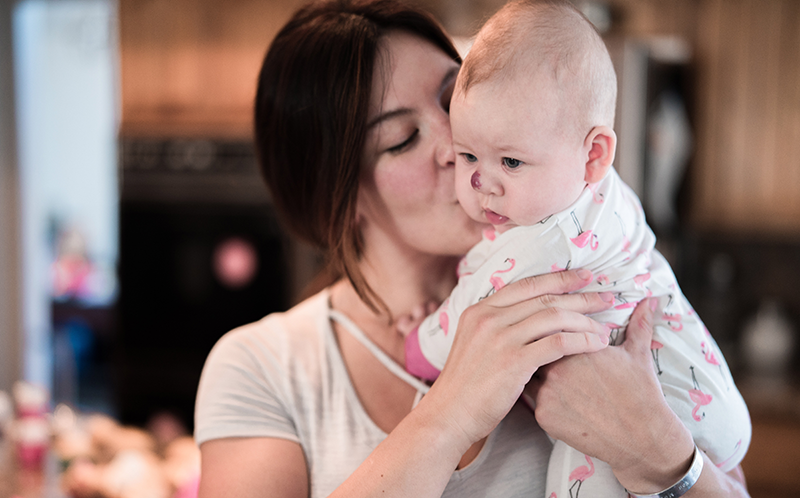 Q: Were there any adjustments you had to make to your nutritional goals to ensure you obtained the nutrients critical for pregnancy?

A: Oh yeah, definitely. I was reading every week and learning what and how she was developing during that time. There are milestones in every trimester… sometimes it’s about her blood being developed, or her bones solidifying, or her cartilage [being formed]. So I was researching all the things that she was developing at that time so I could adjust my diet to give her more of what she needed, whether it was calcium, or iron, or fatty acids. For example, in the third trimester it’s all about brain development and her packing on good fat and her lungs developing.1 So it was important for me to eat a lot of avocados, salmon, and take fish-oil supplements and omega-3s [and other fatty acids]. It was important for me to stay on top of that to give her every advantage. The way I looked at it is she’s being built for the first time and this is her baseline. So I’ve got to try and give her everything I can [nutritionally] from my body.

Q: As a first-time mom, what are the most important lessons you want your daughter to know as she ventures into the world?

A: My gosh, that’s such a hard question because there are just so many things. But first and foremost I want her to believe in herself. I think confidence is key to everything. I also want her to understand that failure is OK. Failure is something that you should welcome. Failure is something to celebrate. Don’t be afraid to fail. Because anyone whoever did anything great failed a lot before they accomplished greatness. So thrive in your failure. Learn from your failure. I don’t want her to fear failure and be indecisive. Just go. Just do things. Have the confidence to know that even if you fail, even if you burn it all down, you can build it again.

Miesha Tate is an American mixed martial arts pundit and former mixed martial artist who competed in the Ultimate Fighting Championship (UFC) and is a former UFC Women’s Bantamweight Champion. Miesha is an accomplished athlete but also laser-focused on empowering women to reach personal goals and develop life skills for healthy living. She is very involved in staying fit through exercise and proper nutrition, especially before, during and after pregnancy. Miesha welcomed her first child, a baby girl, in July 2018